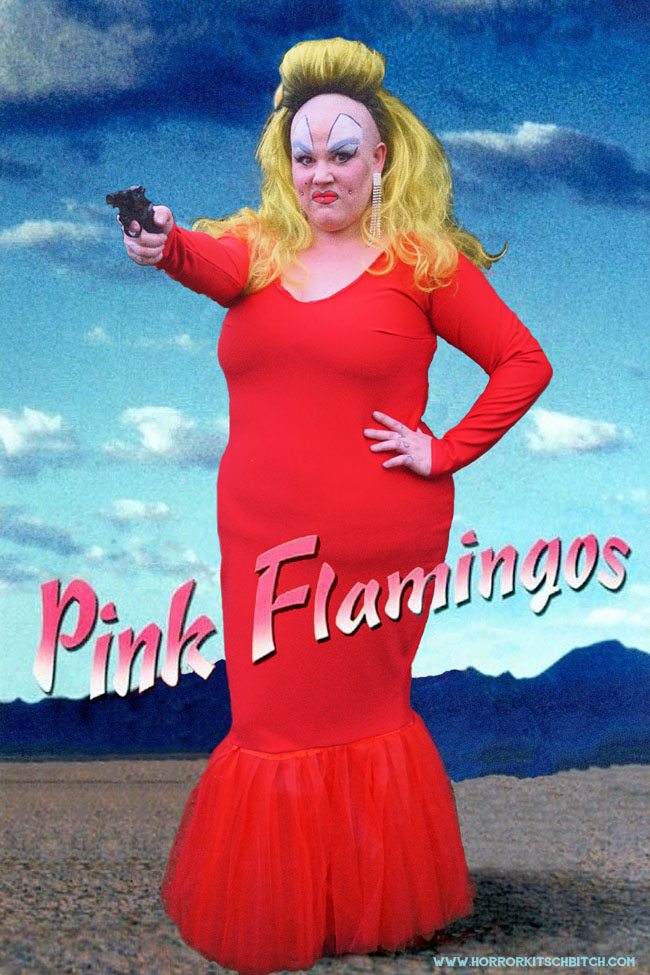 If we’re Instagram friends, you may already know that last Halloween I dressed as Divine/Babs Johnson from John Waters’ trashtastic masterpiece ‘Pink Flamingos‘. It was my biggest (pun intended) costume undertaking yet, and Sam and I got some epically fun photos I wanted to share. Since i’m not a total narcissist, I decided to intersperse them with this list of reasons why I am OBSESSED with Divine (and her male counterpart, Glenn Milstead).

THE COSTUME
The costume took about 2 months to (slowly) put together. I basically accumulated my own reference images and analysed every aspect of the infamous red outfit, and then set to work collecting the necessary items from around the world (mostly; eBay). I made the dress, heavily modified a wig (I’ll post a detailed ‘how to’ eventually), and am SUPER fortunate to have a good friend who is a special effects artist (and my SPFX mentor). Without his bald cap application and (INSANE) paint job, this costume would have been at least 1000% less effective, and I can’t thank him enough for his contribution.

I also padded my hips, butt and belly. To do this, I watched a lot of youtube videos on drag queen padding, but in the end I decided the easiest and most effective way was to rip/cut up an old pillow and use the inside stuffing under 2 pairs of flesh coloured stockings.

So, without further ado;

10 REASONS WHY DIVINE IS MY SPIRIT ANIMAL 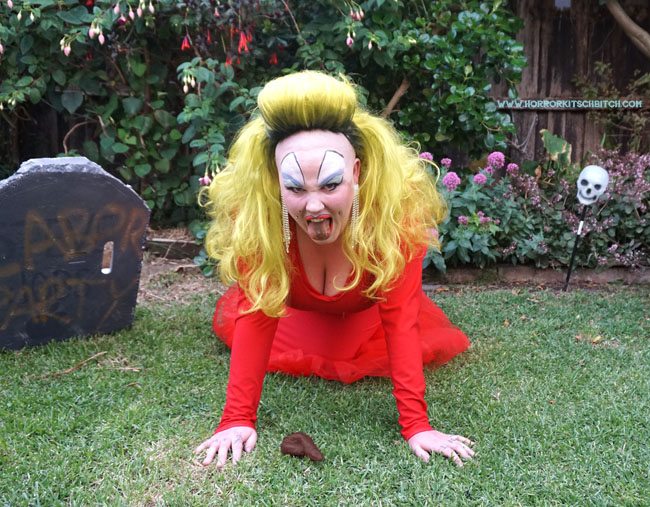 1. His forehead is shaved with the sole intention of creating a larger canvas for eyeshadow. What’s not to love about that?

2. Glenn Milstead never wanted to be a woman; he was playing a character. (Sidenote: this is a trait shared by one of my favourite ever queen’s from RuPaul’s Drag Race, Bianca Del Rio, who always refers to himself as a ‘he’ even when he’s in drag.) As somebody with a love of acting and performing, I really get off on this notion of creating a character and adhering to it so much so that it becomes an alter ego. In fact, all of my favourite queens do this (Jinx Monsoon, Sharon Needles, Latrice Royale, Milk…) In Pink Flamingos, Divine’s feminity is undeniable… the character’s conviction and integrity; unquestionable. What a character, what a performance! 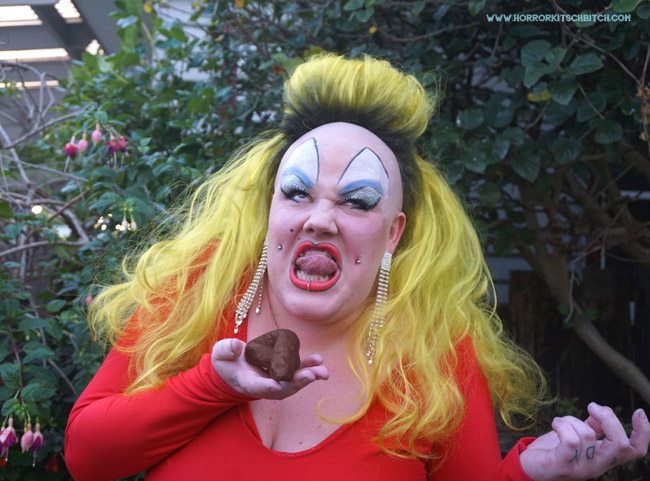 3. Glenn was an advocate for self-expression and living personal truths. When he began dipping his toes into the Waters (hehe) of drag, he and John were going to drag balls where he was faced with the prejudices of thin and traditionally beautiful queens who wanted to look like “real women”. This was an imitation of the heterosexual world that, they felt, had in many ways oppressed them. So why would he attempt to imitate that? Shouldn’t he just do his own thing? He was fat and obnoxious, so why not have fun with it?!

4. For me, the character of Divine is still an ultimate icon of body positivity and personal confidence, exemplified by her in-your-face sexuality and extreme figure-hugging outfits (amongst other things). In fact, Glenn’s entire career was essentially a rebellion against queer marginalisation. 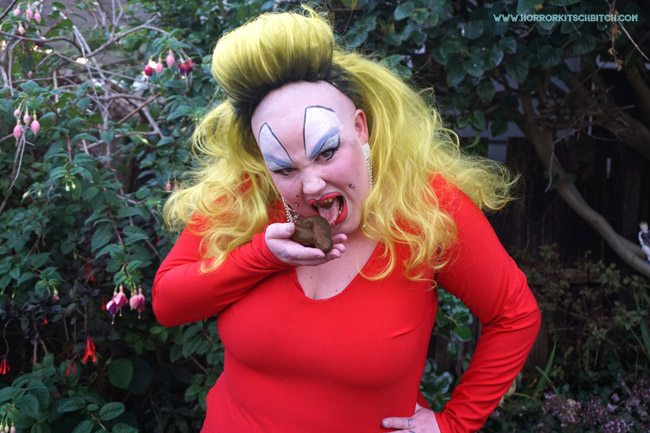 WHO WANTS TO DIE FOR ART?

5. Doing drag in this era would have been BRAVE. For context: there was very little of a gay scene, because homosexuality was still illegal. “It was kinda more fun then” says John Waters – whose frank and subversive views on homosexual culture never cease to amuse and baffle me.

6. Glenn died on the exact day I was born; 7 March 1988. I like to convince myself that I am his reincarnation, but in reality March 7 in the USA would’ve been March 8 in Australia. I could’ve just been soul-less for a day, right?

7. The character of Divine is the basis for Ursula, from The Little Mermaid.

8. People who love Divine (and, I must add, John Waters) are united by a strong bond. A bond that screams “I am a juvenile delinquent” (despite our age) with an anarchist curl of the lip. This love (obsession, to some… *shifty eyes*) is entrance fee to a club that believes in “cinematic terrorism”, shock value with a purpose, and supports the Dreamlanders‘ intentions of rebelling against “suburban small-mindedness”.

9. I often like to sit and ponder, if Glen had lived, would the show be “Divine’s Drag Race” instead? How about co-hosting, with Mama Ru?!

10. After his success in John Waters’ films, Glenn continued to carve out a magnificent and steadfast career that involved theatre, musicals, comedy shows and DISCO stardom. These shows, no matter the context, always strived to push society’s boundaries of what was artistically acceptable. For example, one performance involved Divine rolling onto stage in a shopping cart full of dead mackerel, which he threw at the audience while screaming obscenities. Make of that what you will.

If you made it to the end of this article, we are already best friends. I think you’ll agree with me when I say: the world deserves bad taste. The world deserves Divine. So, thank you Glenn Milstead. You are the filthiest person alive, even in death.

If you haven’t had enough of a Divine fix, I can highly recommend these documentaries:

I Am Divine & Divine Trash 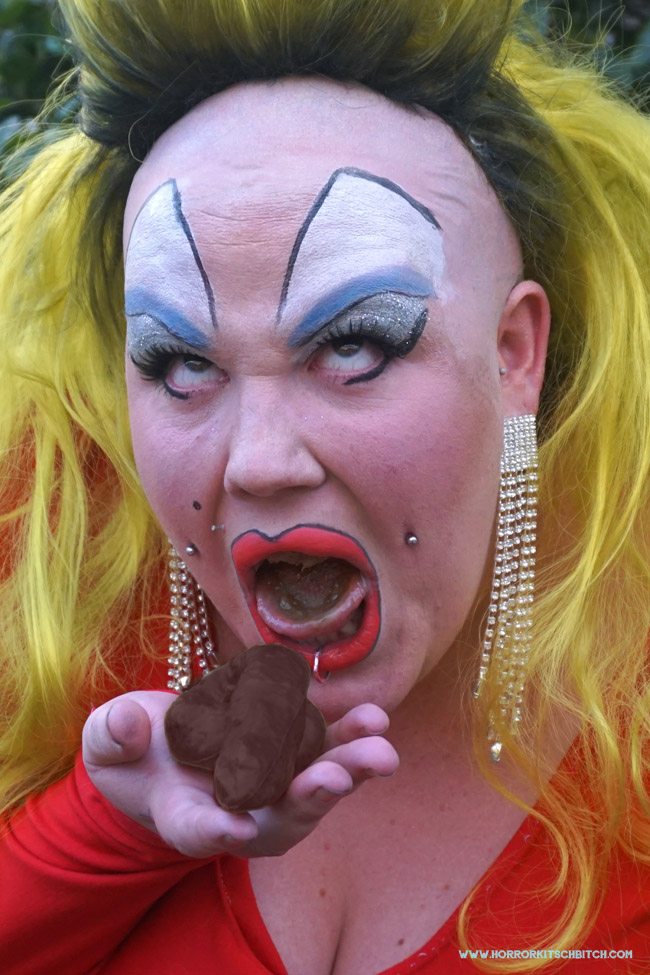 Are you a fellow Divine and/or John Waters devotee? Have you cosplayed as any of these characters before? Link me please!!