It’s been a whole week since the Curvy Couture Roadshow. I’m still buzzing, and it’s definitely not just the ridiculous amount of coffee i’ve consumed this week. Sorry it’s taken me so long to post about it, I really hope I can find the words to express how amazing last Sunday was.

First of all – the feeling of comradery! <3 I felt like I was personal friends with every person in that place. I know that’s kind of silly to be like “hey you’re fat, I’m fat, we’re friends!” I know that there is so much more to me than being a plus size woman, but it has taken me so damn long to be ok with my body. It has been such an incredibly hard slog, and it’s a slog you can be sure just about every other woman in that room has felt, or is feeling. There was definitely something in the air, because I felt so damn empowered and inspired by all of the amazing, beautiful and talented women in that room.

Secondly, my outfit. I felt like a babe, but more importantly, I felt like I was ALLOWED to feel like a babe. And that is such a novelty. I was so honoured to have so many compliments and photos with other women, it blew my mind to feel the love. 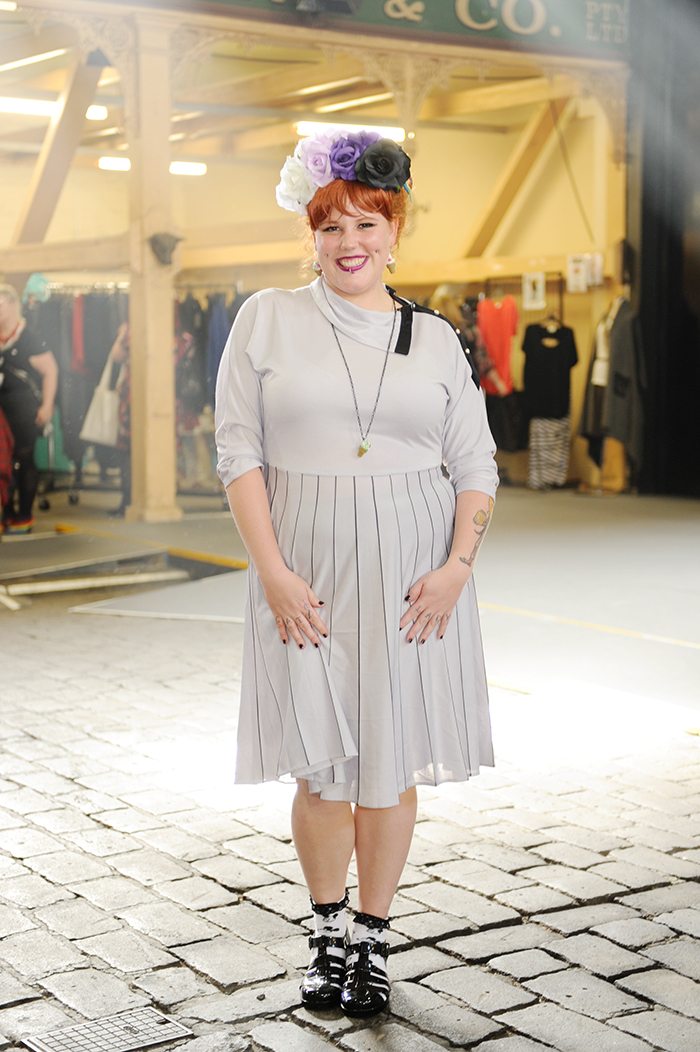 I have to give a huge shoutout to the wonderful ebay seller SWEET AS CANDY VINTAGE – not only was her flower crown the total showstopper of my outfit, but I ordered it on Wednesday late afternoon, and had it Friday morning before 8am. It’s my first flower crown, and I love it. The colours are so unique, and the quality is great. 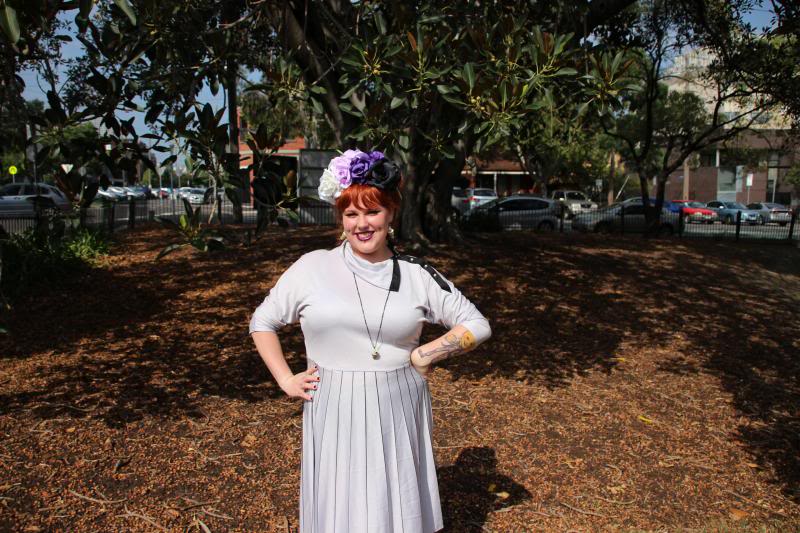 We had us some brunch, and then wandered over to the show – via a church. 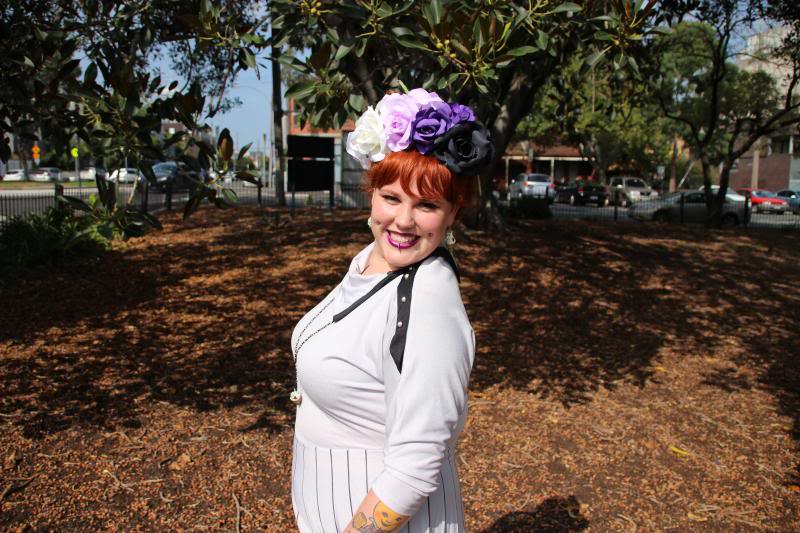 This dress is thrifted – a vintage Aussie label called “ARC” from Sydney. 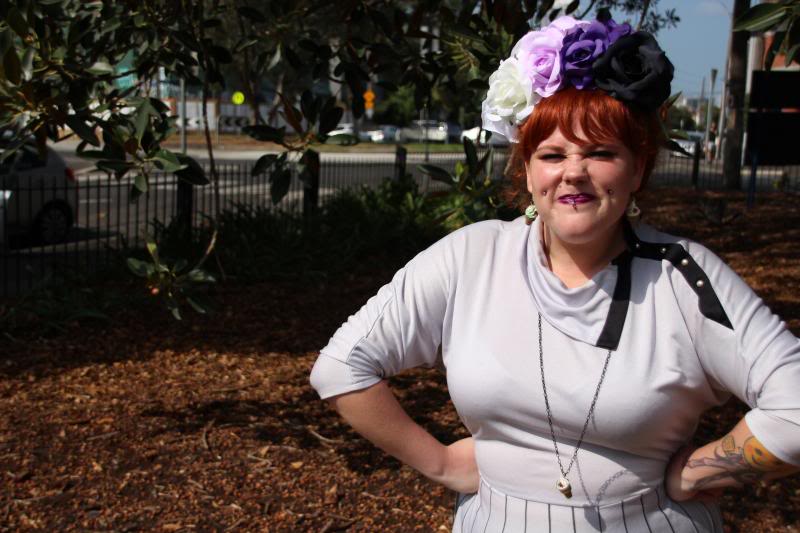 I really just can’t resist pulling ridiculous faces.
Also, the sun was ow in the eyes. 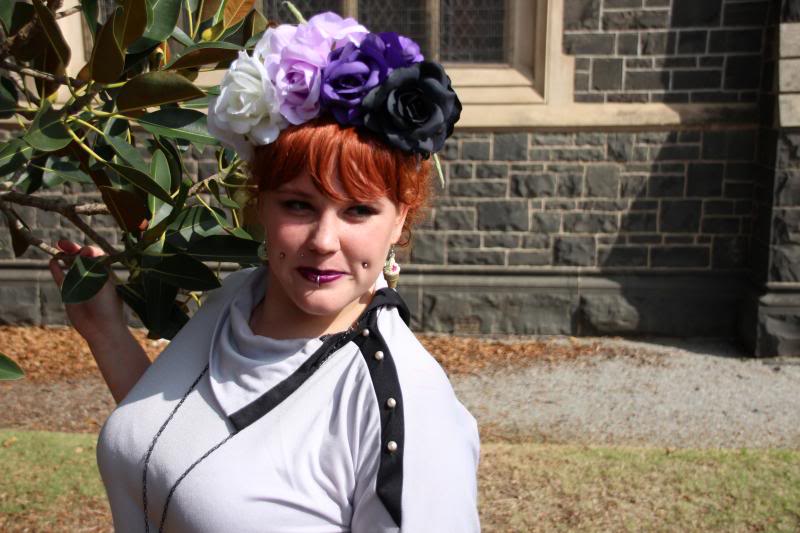 Sometimes I can KINDA keep a straight face. 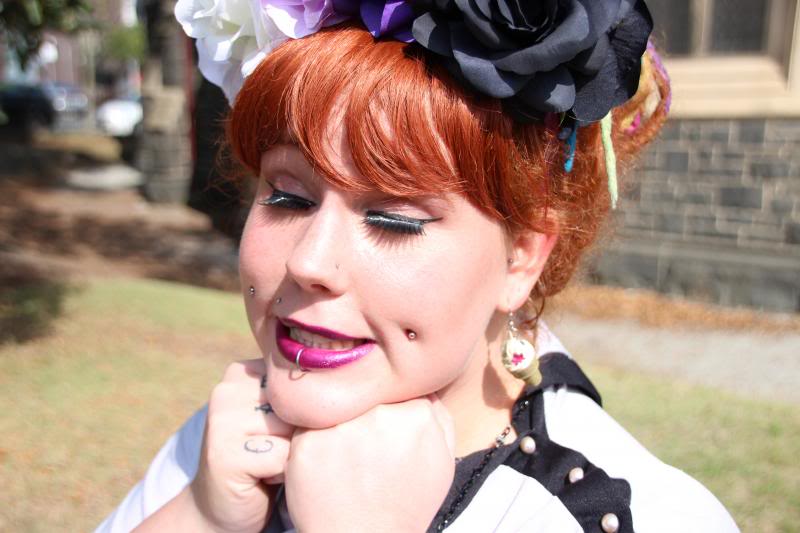 “Look ma, I did my makeup reeeeal purdy”
Lipstick: Poisonberry by LIME CRIME <3 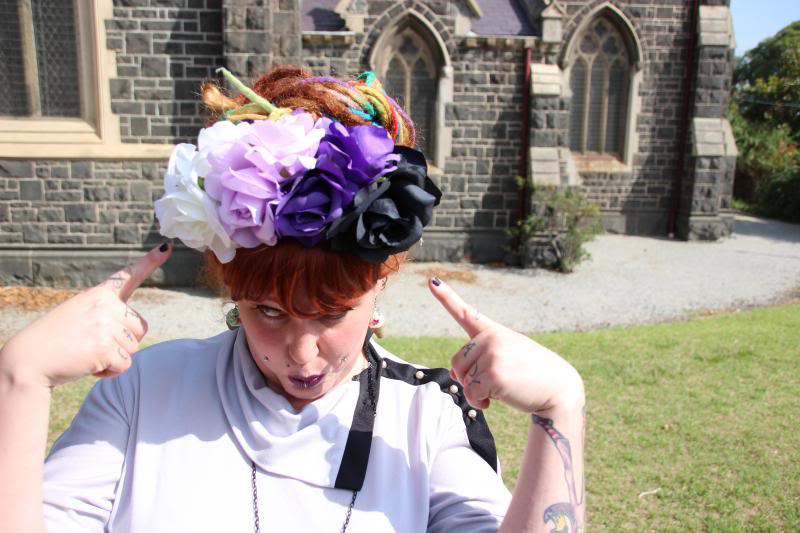 The aforementioned flower crown, from Sweet As Candy Vintage.
Get yourself one!
I was truly so excited to see a runway. It was the first I’ve ever seen in real life, and I was all like “where is Tim Gunn?!”. Sadly, I was on the wrong continent. But I did have myself a beautiful man-bag, gaydate; the one, the only, Samopust. 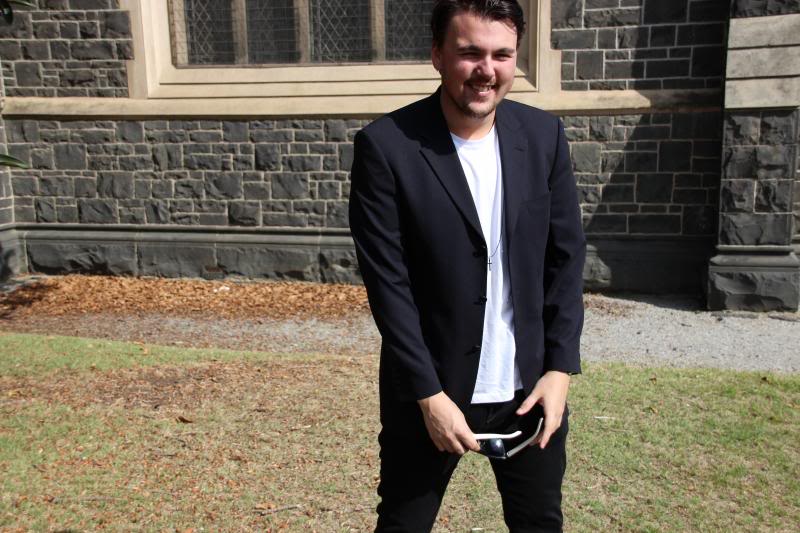 Now, the clothes. I really enjoyed all the shows. There was definitely a minimum of at least one piece per collection that I thought I would wear. But overall, most were a bit too mainstream and/or “fashiony” for me. I’m not complaining, I kind of expected this to be the case. I didn’t really mind, but I wasn’t crazy-lusting over anything, with the exception of a couple of pieces (see below for my average, b-grade shots, taken from the second row).

My FAVOURITE show of the day was definitely: Bombshell Vintage – her vintage reproduction range “Atomic Bombshell” is TO DIE FOR, and can be customised for perfect fit. She also have a collection of actual vintage pieces in plus sizes. I’m certainly going to be saving my pennies so I can treat myself to a piece, soon!! 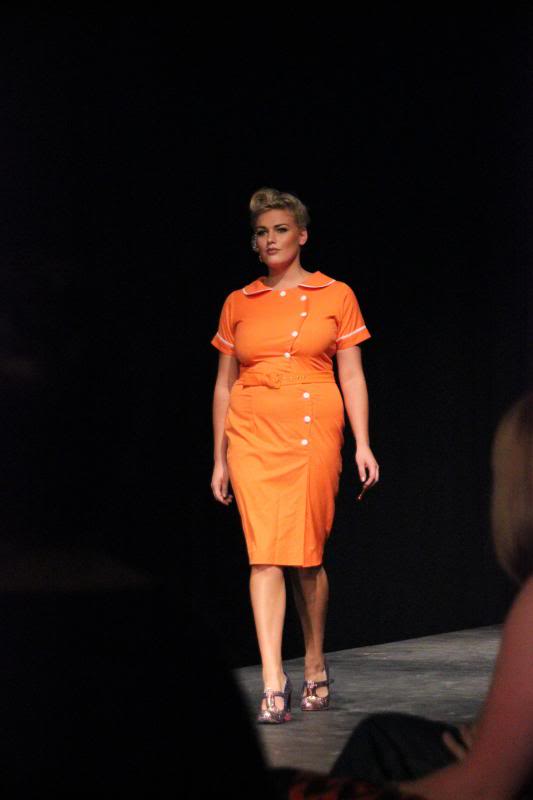 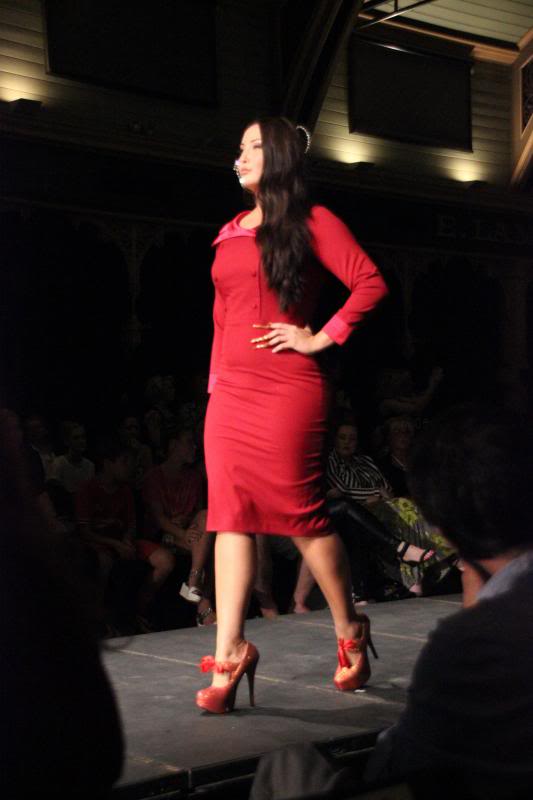 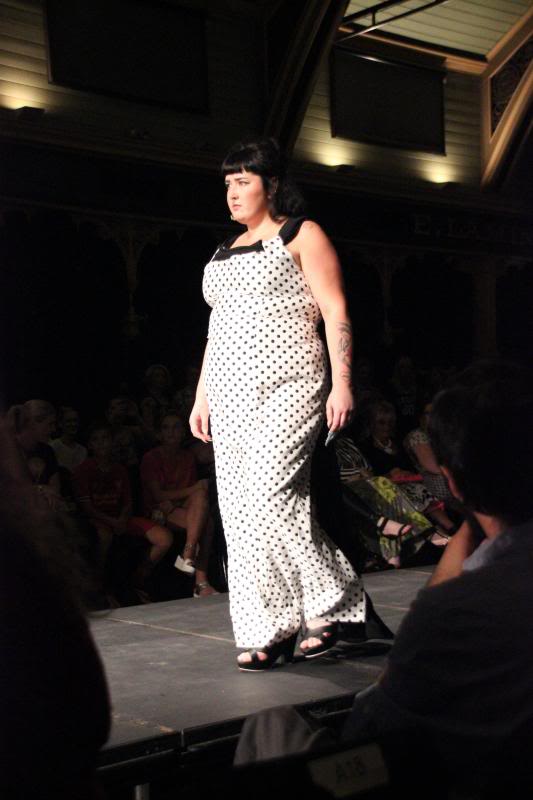 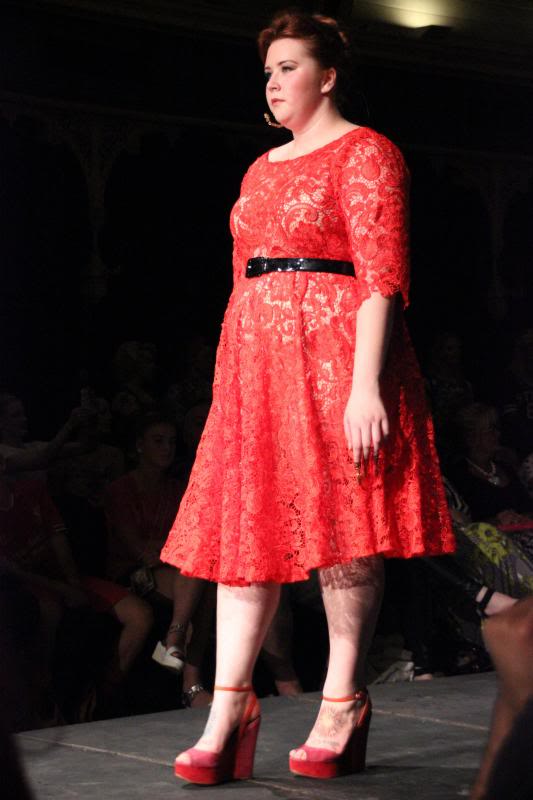 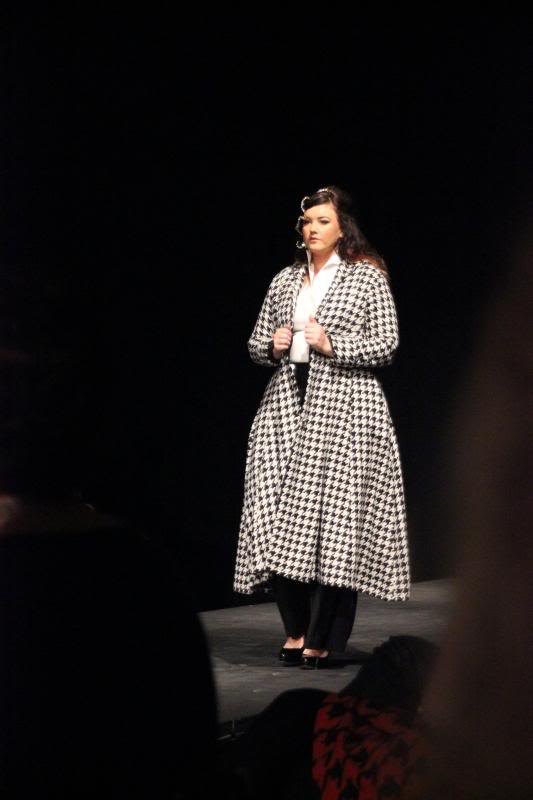 I don’t particularly like houndstooth, but the CUT of this jacket!
Excelsior!
And it’s available in other fabrics!! 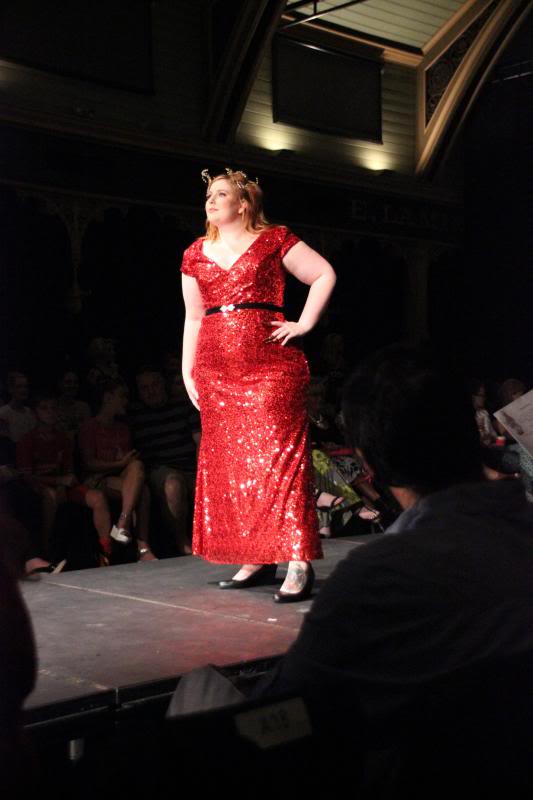 My other favourite collection was from Misty Belvidere, but mostly for her AMAZING Mermadian Dress. Like, wow, holy shit this is a dream dress. Miss Kate (the designer) was also such a babe, and lovely to talk to. She had on the mermaid skirt (made from the same sequinned material as the dress), and was very proud to show me when she ran her hand the opposite way over the sequins, they flip over to revel a black side. They look like scales!!!! I am devastated that this is a poor time of the year for me, or i’d be SNAPPING up one of those numbers. She warned me there is very limited fabric, so i’m quite sure i’ll miss out. * cries * 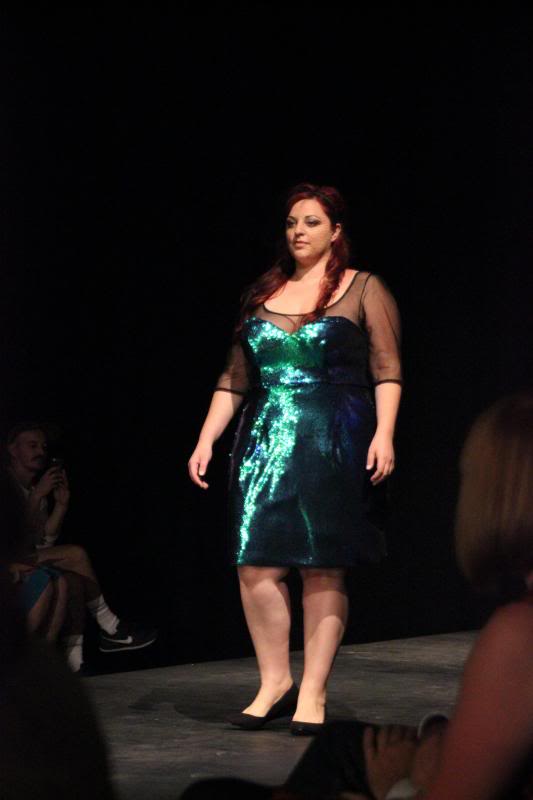 The one collection that really did NOT appeal to me was the Embody Denim range. Yes, it’s true, i’m not really a denim person. But I wanted to have my mind changed. I was prepared to have my mind changed! And although there was a pair of jeans I thought looked quite nice, it was very easy to quickly dismiss them as something that wouldn’t look good on me, because they were on a thin model! They were ALL thin models in the show.

Now don’t get me wrong, this is NOT a body-bashing comment. Those girls were gorgeous, and probably considered “plus size” in a commercial model setting. But this day was not about Tyra Banks’ version of “fiercely real”, it was about actual fat babes. And for the most part, it was. But when the Embody Denim girls came on stage, the lady who was sitting next to me (who was NOT Sam, and who WAS a complete stranger) gave me a look, which I returned. We both agreed we had no interest in that collection because we had NO idea how the pieces might look on our bodies. And from the look on the faces of a lot of the crowd – they were feeling the same way too.

Speaking of models, DAMN there were some amazing girls up there, strutting their stuff. The standouts for me were Charity Saint James, Caitlyn and unknown, cute, redheaded girl (EDIT: the case is cracked! The redhead is Suzanne Stevens!). They were so fierce, and powerful, and sassy, and just all over gorgeous. I got chills from those 3. It looked like so much fun, and so empowering. If they have an open casting next year, i’d definitely like to try my luck. 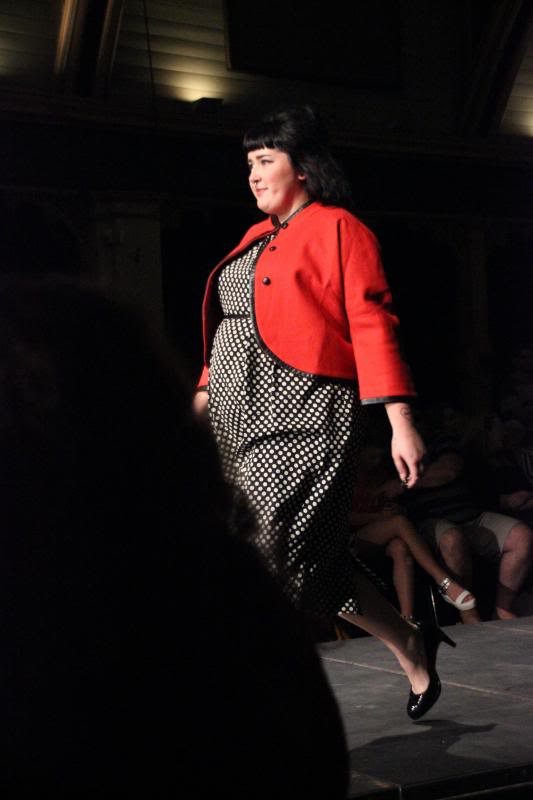 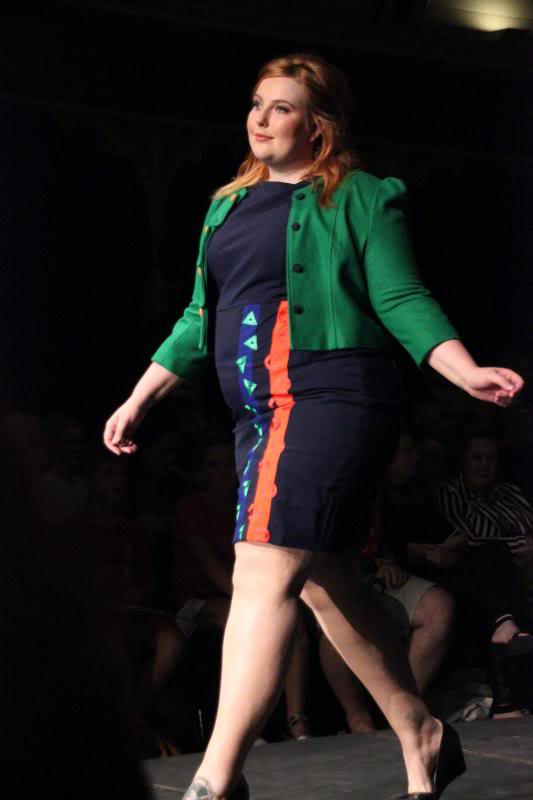 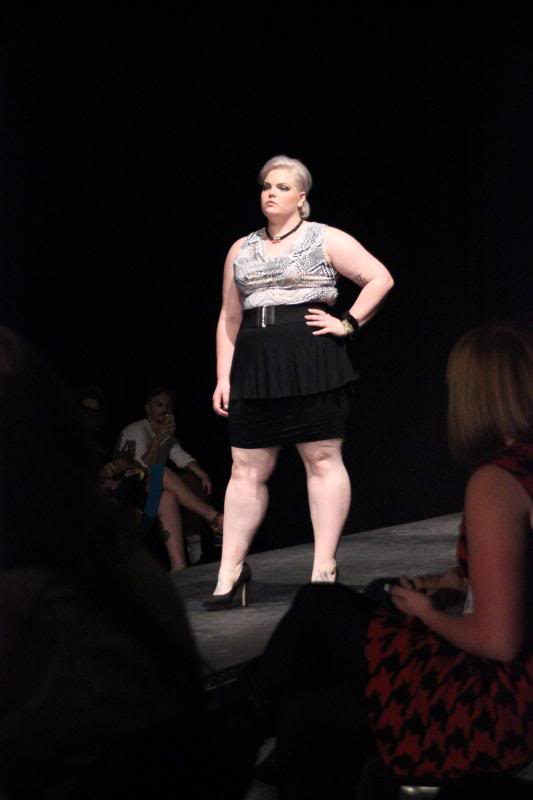 Caitlyn gets TWO photos because:
A) she is a babe
B) she is a lovely and supportive Instagram friend
C)LOOK AT DIS POWERSTANCE: 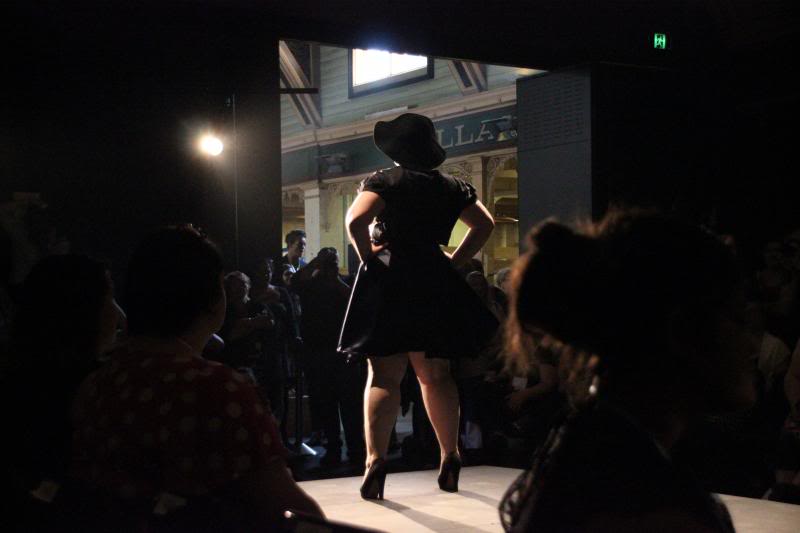 I also met a few of the Aussie Curves ladies, which was awesome, and I made friends with the EXCEPTIONALLY beautiful and friendly ladies over at Silvana Tedesco (wedding dress couture); Silvana herself, and her stylist friend Erika (The Queen of Curves). They were both SO lovely, I was so honoured to chat with them and swap details. I also met Gemma Flack, and squeed! I think I was a bit creepy: told her I was obsessed with her. I meant “HER ART”, but it didn’t really come out right. I’m pretty stoked to have not one but TWO tote bags with her CCR artwork on them (Sam didn’t want his – rookie).
Lastly, I’ll leave you with this funny anecdote: when Sam and I were standing in line to get in, we saw a very fancy shmancy chick pull up in a town car, and be escorted straight into the building by a man. Sam and I joked that he was her bodyguard, and mused that she must be a designer. Later on, we found ourselves standing in line behind them. The lady turned around and complimented me on my style. She introduced herself as ‘Hayley’ and asked if she could take a photo of my shoes so she could get a pair. I asked her if she was a designer, and she politely said no, but there was something VERY majestic about her. She HAD to be a somebody. Sam and I both stood there, discreetly squinting at her flipped over nametag, to reveal her name was Hayley Hasselhoff! We quickly googled her to discover that she was, in fact, THE HOFF’S DAUGHTER! Sadly, she was not the one who filmed “the video”. 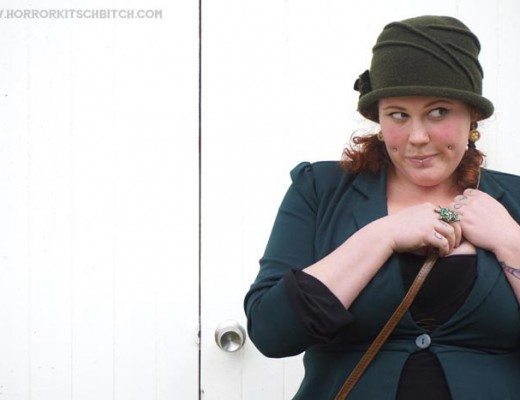 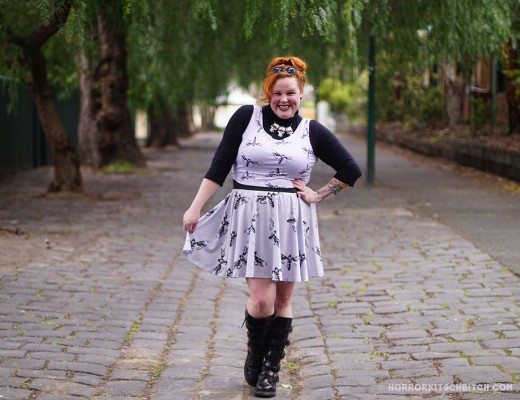 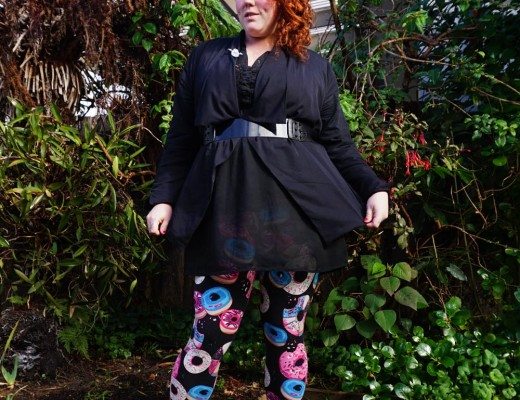